THEY FOLLOWED THE STAR

For one more Sunday we will continue to look at the amazing things that happened when Jesus was born. Today we read about the Magi that came looking for the future king who they knew was to be born. They came to Jerusalem looking for the newborn king, knowing that was the center of the Jewish world. They obviously believed this newborn king probably was born to someone in a position of leadership. Of course when Herod heard of this, he was alarmed that men had come from so far away to pay their respects to this newborn king. He knew this must be a big deal and could present a problem to his leadership in the region. Herod called on the Jewish scholars to find out what these men from the east were talking about.

We looked at the question last week of whether any of the Jewish leaders still believed in the promises made thru Isaiah 700 years earlier. It would appear the answer to that question is no. It took the Magi from the east to remind the Jewish leaders of that promise from so long ago. But once they heard about the possibility they knew where to look to find the answer that the Magi and King Herod was looking for. It was King Herod who sought out the Jewish scholars to see what the Magi was talking about. When King Herod got the answer he was looking for, he called the Magi in and told them, “You will find the child in Bethlehem. Go and find him. Then send word back to me so I too can worship this newborn king.”

We do not know for sure how much time elapsed from when the shepherds celebrated the birth of Jesus until the wise men arrived. We do see Mary, Joseph and Jesus are now living in a house in Bethlehem. The wise men did not find him still in a manger. I cannot help but think Jesus is still a small baby. Otherwise, they probably would have gone back to Nazareth. Nazareth was obviously where Joseph and Mary’s family were from. The wise men brought three gifts to the newborn king. Each one had an important meaning.

(2)  Incense is often used to celebrate those who are of royalty.

(3)  Myrrh was used often for embalming, symbolizing what the Messiah would do for the people.

Once the wise men paid their respects, God warned them not to go back and tell Herod where this new king was, so they went back to their country a different way. God also warned Joseph in a dream what King Herod was up to. So almost the minute the Magi left, Joseph loaded up Mary and Jesus and left for Egypt.

Matthew recognized, as he recorded all these events, that Hosea 11:1 talked of God’s son being called out of Egypt. God once again proved that he is in control, even when things may seem out of control. We again also see Joseph being the man called on to care for both Mary and the future Savior of the world. We see Joseph took the responsibility he had been given very seriously. No one was going to harm this boy whom God was going to use to do amazing things. One must wonder though just how Joseph felt about this boy that many would think was his boy throughout the early years of Jesus’ life. I can only imagine both the sense of pride and responsibility he had to feel. God had given Joseph the important job of being the man that would help to mold Jesus during those early years. And while Joseph knew Jesus was a special man that had come from God, he still felt early on, “Jesus is my boy, my responsibility”. Joseph probably wanted to simply enjoy the moment. We know how much Mary stored up all the things she was told and how a mother has a special bond with her child, but I cannot help but think that this was a special time for Joseph also. After all, God chose Joseph for this special world-changing moment. With all that, Joseph probably still wanted some time just to enjoy his son he has been blessed to raise.

There is a song by Mercy Me called “Joseph’s Lullaby” that may tell how Joseph felt about everything happening surrounding the birth of the Messiah. As we close the service today, I would like you to listen to what this song says and for those who are parents, see if you can relate to everything that is said in the song.

Every Tuesday at 9:30--Bible Study--all are welcome to attend.

New offering envelopes are available by the copy machine.

January 13--board meeting with old and new board members

Please place your offering in the locked box at the back of the sanctuary or mail to the church at PO Box 45, Cerro Gordo. Thanks you for your continued giving!

Have a blessed New Year!

Posted by Church of the Brethren at 8:20 AM 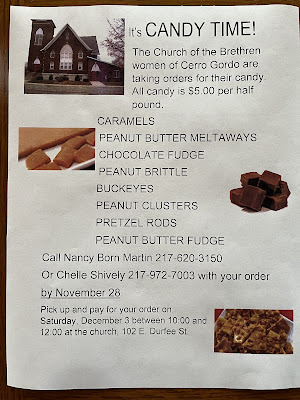