The last two Sundays we have seen how God had set the stage for what was about to happen. God has a way of making sure His people know there is only one way the things God foretells and promises can happen. God also by virtue of the way he does things makes sure we know His hand of mercy, grace and love is at the center of what is happening. The verses we looked at this morning are part of the story most of us have read over and over again, year after year. With that being said, this is still such an incredible story to me. It never gets old, rereading it and reimagining all it means. We once again began this morning seeing that God was telling Isaiah to let the people know that help is on the way. This again is something being foretold 700 years before it would happen. Clearly Isaiah, as well as those he was speaking to, did not understand what it all meant or when it would happen. They were being told something that was humanly impossible. Yet this is what God planned to do. We fast forward to what is happening to this young woman, Mary, and the man who is planning on marrying her. What we read this morning skips ahead to Joseph’s reaction to what God’s plan is. We are not going to read at this time how Mary was told about what was about to happen. That is found in Luke 1:26-38.

As we see in what we read this morning, Joseph was skeptical about what was happening. Obviously, Mary had already told Joseph what Gabriel had told her, because Joseph had plans of ending the engagement and calling off the wedding. Obviously, Joseph found Mary’s story hard to believe. NEVER in history had anything like this happened before, so it is easy to understand why. Mary realized something special was happening because of the special visitor she had that delivered the message to her. That would probably get anyone’s attention if out of nowhere someone was in the room talking to us. We see Mary got almost immediate confirmation when she went to visit her relative, Elizabeth. Elizabeth and Zechariah had been the first to be visited by Gabriel the angel. They were the first to know God was getting ready to fulfill what had been promised for 700 years. Now is the time. God is about to change things for all who by faith will believe. We do not know for sure when Mary broke the news to Joseph. It very well may have been when she got back from visiting Elizabeth and Zechariah.

As I try to think of how I would react, I find myself believing I would have reacted the same way Joseph did. For you women, how do you think you would have reacted if suddenly someone you had never seen before announced to you that you were going to have a baby and it was not going to be just any baby? Would you have not only told him it is impossible but also that you just cannot. Even if God can do this, I do not want the responsibility and besides that my fiancé will never believe me. Try to put yourself in Mary’s place as best you can. Then there is Joseph. From what we read, Joseph must have been so stunned when Mary told him the news, he did not know what to say to her. He apparently left her and tried to figure out what to say and do, but none of it included going through with the marriage to Mary.

While Joseph was wrestling with what to do, he also got a visit. Joseph’s visit was not the same as Zechariah or Mary where Gabriel appeared in the room with them. Joseph was talked to in a dream. All of us have probably had dreams that we remembered after we woke up. Sometimes I have had some dreams that seemed so real and when I woke up, I wondered how things would have turned out had I not woken up. Have you had dreams that seemed real at the time? Well, here is Joseph having a dream unlike any he had ever had. In this dream, he is being told about what Mary had just told him. This dream was so powerful, Joseph apparently could not avoid the message of the dream. This was not just a dream he could wake up from and go on about his life as if it never happened, as if it were not real, as if it was only a dream. Joseph, I cannot help but think, knew he had to marry Mary because God ordained the marriage. What an incredible God we have!

Joseph and Mary were just ordinary people. They were not people of high standing; they did not come from important families, even from a Jewish perspective. Yet they are who God chose to raise the Savior of the world. Throughout the Bible we see the truth that God keeps his promises. We also see God uses people of all types. The only requirement is that you are willing to allow God to use you. As unbelievable and unlikely as what happened to Joseph and Mary was, the one basic fact remains. A fact that has two parts. First, God keeps his promises. And secondly, God will use those who say, “Yes Lord I will”.

Aren’t you glad God kept his promises? The Savior of the world has come! We have been redeemed! God brought all those things about in the most incredible way. We celebrate Christmas because we know God is a God of miracles. He proves it over and over again. Will we receive the miracle God has made available to all who will receive? Next Sunday we will once again see how God officially put his plan into motion. The Christmas story never gets old to me. God reminds me how much he loves us and how nothing is impossible with Him.

Announcements
Every Tuesday at 9:30--BIBLE STUDY. All are invited to attend.
Worship all winter this year will be in the sanctuary. We will not move to the Fellowship Hall as has been our custom.
Sunday, January 10, 2021--COUNCIL MEETING right after worship
Wednesday, January 13--BOARD MEETING. New and old board members are asked to attend as this is the reorganization meeting.
Prayer Partners: If you have not put out or picked up your presents, please do as soon as you can. New prayer partners will be in your mailboxes on December 20.
Copies of The Upper Room and Daily Bread are available.
Please place your offering in the locked wooden box at the back of the sanctuary or mail to PO Box 45, Cerro Gordo.
The women's candy sale was very successful. Thanks to everyone who helped in any way!
Donation Box this month is for The Lord's Storehouse.
First Sundays: Food donations for the food banks.
Pastor Larry Traxler: 217-454-2362

Posted by Church of the Brethren at 9:59 AM 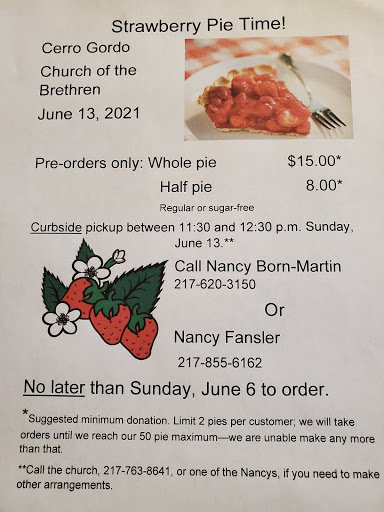