THE TALE OF THREE CITIES

In these verses, we see Paul and Silas visited three different cities over a short period of time. The reaction and reception they received was different with each city they went to. The first city was Thessalonica. Immediately Paul went to the Jewish synagogue to discuss scriptures with those there. Thessalonica was a major city of 200,000 people. It had people of all kinds of beliefs living there, but Paul’s primary mission was to share Jesus with the Jews living there. Paul soon had some success not only with some of the Jews but also some of the Greeks or Gentiles. Not all of the Jews were happy about what was going on to the point that if you remember what we read, it says they rounded up some bad characters and formed a mob and started a riot in the city. The mob searched for Paul and Silas but could not find them, so they dragged out a guy by the name of Jason because he had let them come to his house for a while.

As I read this, I could not help but think about what has happened in this country this past summer. Whether we agree or disagree with those who were angry, mobs and rioters took to the streets destroying and robbing businesses that had nothing to do with the complaints, just like with the mob in Acts that could not find the ones they felt they had a beef with. They took it out on someone who had nothing to do with what Paul and Silas had been doing. The mobs and rioters in America did the same thing. They knew they could not personally do anything to the ones they were mad at, so they robbed and destroyed places that were easy and convenient. Some things do not ever change, do they?

The next town they went to was Berea. Paul and Silas did the same thing when they got there. They went to the synagogue to talk about Jesus. The reaction of the Jews there was much different. See what it said. The Bereans were of more noble character than the Thessalonians. Obviously, the people of some towns and cities are good and decent people and some are not. We read the Bereans received the message with eagerness. They did, however, carefully think about what was being said. We also read many Jews and Greek men and women believed.  So, everything was good in Berea, right? No, there were some from Thessalonica that heard Paul and Silas were there and the mob followed them agitating and stirring up the crowd against Paul and Silas. Once again, this sounds familiar with what happened here in America this past summer.

The believers of Berea helped Paul escape to Athens. Athens is the third city Paul and Silas went to at this time. Paul and Silas as well as Timothy who was new with them had got separated. While Paul was in Athens by himself, he roamed around town and was troubled by all the idols that were in that city. Once again, Paul went to the synagogue to share Jesus with those who where there. On this occasion, Paul also went to the streets with the message of Jesus. Athens was known for their great philosophers and some of them confronted Paul. They apparently had never heard of Jesus and his story did not make any sense to them. But God revealed to Paul a way to reach this group of people in the very different city. Paul explained that as he walked around their city, he ran across an altar that was dedicated to an “unknown god”. Paul explained that is who I have come here to share with you. Paul proceeded to explain to them about the God who created the heavens and the earth.  He also explained to them about God’s plan to redeem creation through what Jesus did and had done. We read that some sneered at such things, yet others said they would like to hear more.

As we consider the three cities Paul and Silas visited and preached in, we see different attitudes by some in each city. In Thessalonica, while some embraced the message, others took to the streets as angry mobs and rioters. At Berea we see the people there were kind and receptive but outside agitators came to stir up the people of that city. In Athens we see people who view life differently from the other two. If they were going to change the way they have always viewed things, it was going to take time and persuading. They were, however, respectful, and open to learn more. In each one of these cities we see there were some good people who may not agree with everything you say but will treat you with respect. In one of the cities we see some people just enjoy causing trouble.

When we look at Cerro Gordo what do we see? I believe it is a town made up of basically good people who want to do the right thing. In spite of there being churches in this town for a long time, not everyone has come to accept Jesus as Lord and Savior. That continues to be our mission. Just like Paul and Silas proclaimed the good news to those cities, we are called to continue to share Jesus in whatever way we can as well. Will our message always be accepted? Probably not. That part is not up to us, it is up to God. Paul and Silas could have been disillusioned and quit after their reception in Thessalonica, but they did not quit. No, they kept moving forward wherever God led them. That continues to be the message God is telling us at the Cerro Gordo Church of the Brethren. Don’t quit. God is saying not everyone is going to love what we are doing, but together we can do great things.

Every Tuesday 9:30 a.m. Bible Study. All are welcome to attend.

Posted by Church of the Brethren at 6:48 AM

Time to Order Your Candy! 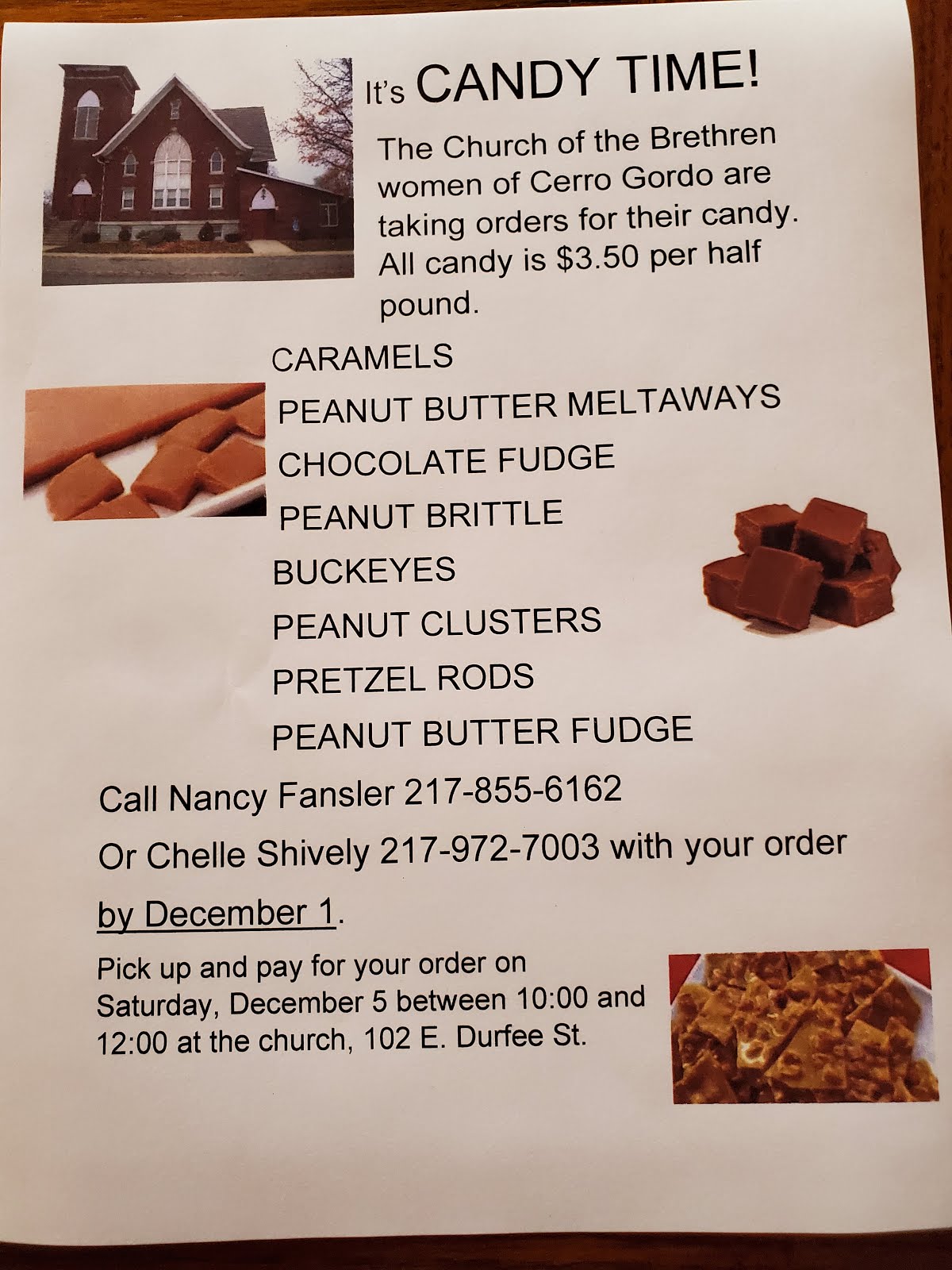